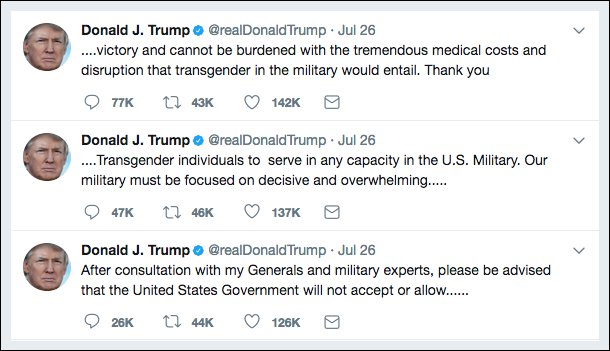 President Trump announced via Twitter last week in a series of three Tweets that United States government would no longer accept or allow transgender individuals to serve “in any capacity” as the military “cannot be burdened with the tremendous medical costs and disruption that transgender in the military would entail.” His three Tweets compiled:

“After consultation with my Generals and military experts, please be advised that the United States Government will not accept or allow transgender individuals to serve in any capacity in the U.S. Military. Our military must be focused on decisive and overwhelming victory and cannot be burdened with the tremendous medical costs and disruption that transgender in the military would entail. Thank you”

That’s quite a stance President Trump has taken, and a change to the military’s current policy of allowing gay, lesbian and bisexual people to serve openly after President Bill Clinton opened the door with his implementation of a “don’t ask, don’t tell” policy beginning in 1993 when it came to sexual preference/orientation in the military. The debate on this issue has gone back and forth over the past seven decades. Even as far back as World War II, those policies were the subject of substantial debate as the military eventually brought in some 18 million men over the course of that war. One of the “deviations,” as it was termed then, that physicians giving physicals to incoming soldiers joining to fight in WWII were asked to look for was listed as “homosexual proclivities,” which would disqualify someone trying to enter the military. Various administrations wrestled with the subject over the next five decades with the result being that of exclusion throughout the armed forces, until 1993, when Congress passed and President Clinton signed a law instituting the policy commonly referred to as “don’t ask, don’t tell” (DADT), which allowed gay, lesbian, and bisexual people to serve as long as they did not reveal their sexual orientation.

Then in 2010, the ban on openly gay, lesbian, and bisexual service personnel was ruled by two federal courts as being unconstitutional, and a federal appeals court suspended the DADT policy. In December 2010, Congress passed and President Barack Obama signed the Don’t Ask, Don’t Tell Repeal Act of 2010 and, under its provisions, restrictions on service by gay, lesbian, and bisexual personnel ended as of Sept. 20, 2011. Transgender people were allowed to openly serve starting June 30, 2016.

Now, let’s remember, this recent discussion was started by a Tweet from President Trump. And a Tweet is not an official directive. A day after the president Tweeted about transgenders in the military, Joint Chiefs of Staff Chairman, Gen. Joseph Dunford, announced that the current policy – meaning that policy set in place over a year ago regarding transgender people being allowed to openly serve in the military – will remain intact until the president issues an official directive.

Since that set of Tweets, there has been quite a bit of back-and-forth on both sides of the issue. Much of the discussion has been around a couple of things:

I have experience on the medical side of things as well as military (Dr. Sudip Bose’s profile). As far as the medical side of things go, most transgender patients do not undergo sexual reassignment surgery, which is expensive, has risks, and has a long timeline. Patients do have cosmetic surgeries to help assume a more masculine or feminine appearance, depending on the transformation aesthetics they’re looking for. Hormone therapy is common.

Also, making a transition from one gender identity to another is not just about a physical, outward appearance. That’s important to understand. Transitioning to become a man or a woman is an important part of a patient’s identity. A vast number of transgender people see themselves as, and identify themselves with being a male or female – opposite of the way they were born – at a very young age, often as children. For example, that “tomboy” girl who always wanted to play with the boys and associated with more traditionally masculine activities and possessions; then there’s the young boy who always wanted to play with the girls and befriend them, who felt more comfortable in his own identity playing with dolls or wearing a dress – typically more traditionally feminine behavior.

Becoming a transgender person is a long and complicated process for an individual. Some people may modify the way they look and dress and become more feminine or masculine in appearance and may even change their name before doing it legally. Some transgenders will make the transition in only part of their lives, for example assuming a male or female persona personally, while at home, but may remain the opposite gender at work. There are those who have come into the emergency department and present themselves as their original birth gender, despite having made the transition to the opposite sex in every other aspect of their lives.

However a transgender person presents him or herself – male or female –however they identify themselves, regardless of what you might initially perceive them to be, is the way they need to be treated. It’s actually pretty simple to do and not a deterrent to their care if you just focus on the issue they’ve come to the ED to get treatment for.

On the military side of things, and having been in combat on the front lines, you don’t much care who is what – male or female – as long as they’re doing their jobs. When you’re fighting the enemy, you’re not taking an attendance check to see who’s showed up next to you to join in the fight – male, female, straight, gay, lesbian, bisexual, transgender – none of that matters. You engage your enemy with an application of force to make sure the enemy goes away and you remain living, breathing and standing. The readiness argument, in my opinion, is a bit of a red herring. You fight together. And you really don’t care whether it’s Bruce or Caitlyn Jenner fighting next to you as long as they’re engaged in the fight keeping your butt and their butt safe. When bullets are flying at you, you become instantly ready to apply lethal force, transgender or not.

At his confirmation hearing on Capitol Hill prior to his becoming President Trump’s Secretary of Defense, Gen. James “Mad Dog” Mattis was asked a question by Sen. Kirsten Gillibrand (D-N.Y.) pertinent to this debate. She asked of the general, “Do you believe that allowing LGBT Americans to serve in the military, or women in combat, is undermining our lethality?”

“Frankly senator,” Gen. Mattis replied, “I’ve never cared much about two consenting adults and who they go to bed with.”

“Senator, my concern is on the readiness of the force to fight, and to make certain that it’s at the top of its game,” he said. “So, when we go up against an enemy, the criteria for everything we do in the military up until that point when we put our young men and women across the line of departure, is that they will be at their most lethal stance.”

An important perspective to remember as this debate moves forward.