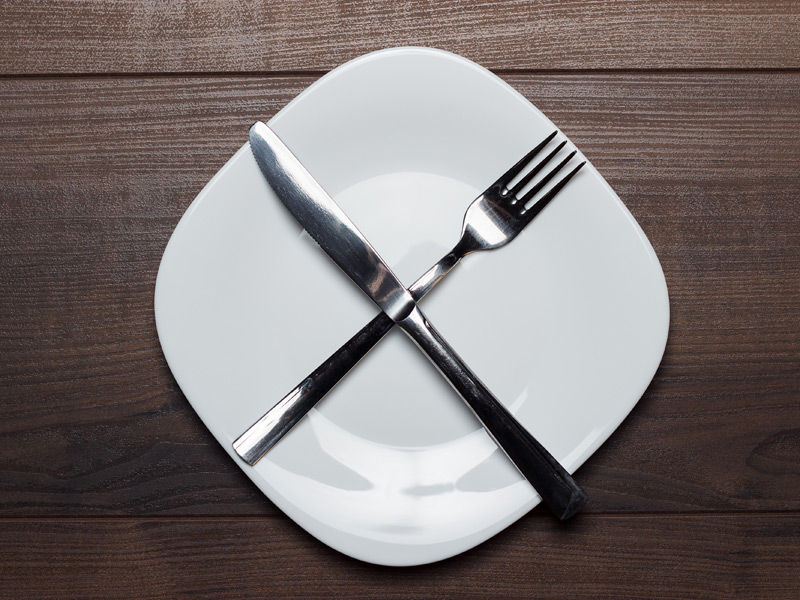 The route to weight loss has traditionally been to cut calories. Swap that regular soda for diet, grab an apple instead of a cookie, and you’ll trim pounds, the idea goes.

But, instead of going for such calorie cuts, many people are now taking more intense steps to lower their average daily calorie counts.

Called intermittent fasting, this latest way to diet takes a different approach. Rather than change how much you eat, you change when you eat. “Intermittent fasting is loosely defined as periods of non-eating, followed by periods of eating,” explains Krista Varady, PhD, an associate professor of nutrition in the University of Illinois at Chicago department of kinesiology and nutrition.

The origins of fasting are rooted in religion. Several faiths, including Islam, Judaism, and Christianity, observe periods of food restriction for spiritual reasons. Somewhere along the line, researchers discovered that skipping meals also has a few health benefits, including weight loss and lowered blood pressure and cholesterol.

How Does It Work?
Normally after you eat, your pancreas releases the hormone insulin. That burst of insulin helps move sugar from your bloodstream into your cells to be used for energy.

Whatever sugar is left over goes into your fat cells for storage. In between meals, your insulin levels drop and your fat cells release stored sugar to keep you going.

Fasting prevents insulin release for a longer period of time. So your body has to burn fat for energy, instead of sugar.

Types of Intermittent Fasting
You can fast in a few different ways. Some methods are more extreme than others:

Alternate-day fasting is the most intense version. You eat nothing and drink only water or calorie-free beverages one day, and then you basically eat what you want the next day.
Modified alternate-day fasting switches between one low-calorie day (about 500 calories) and one day of normal eating.
The 5:2 diet (also called the Fast Diet) involves eating normally 5 days a week, and then cutting down to about 500 calories on the 2 other days.
The fasting-mimicking diet has you eat a very low-calorie diet for just a few days, and then go back to a normal diet. It offers many of the benefits of fasting, without the time investment.
Time-restricted feeding focuses on the timing of your meals. You eat only within a certain time window each day — for example, from 10 a.m. to 6 p.m. Then you fast for the rest of the day.
Can It Help Me Lose Weight?
There is evidence that alternating fasts with periods of eating helps you lose weight, but not much more than you would by cutting calories.

Other studies on alternate-day fasting showed a weight loss of 3% to 8%. Time-restricted feeding produced slightly less weight loss — about 3% to 4%.

Other Advantages to Fasting
Intermittent fasting has a few other benefits, beyond weight loss. After you eat, your body is tied up with the digestion process. Taking a break from food shifts the focus to other areas, like maintaining optimal performance and repairing cell damage. “It gives our bodies time to heal, because they’re not constantly dealing with the influx of nutrients,” Varady says.

And that’s good for your health in general. Early research finds intermittent fasting could help ease things that could harm your heart, like high blood pressure, blood sugar, and cholesterol — sometimes significantly.

Courtney Peterson, PhD, an assistant professor in the University of Alabama department of nutrition sciences, studies the effects of intermittent fasting on conditions like diabetes, blood pressure, and heart disease. She says some of her participants had their blood pressure drop 10 to 11 points from the practice. “That’s a huge effect. It’s about equivalent to a blood pressure-lowering medicine.”

Most of the health benefits from fasting are likely due to weight loss, and some people with type 2 diabetes could also benefit, she says.

“There is research that suggests that intermittent fasting improves blood sugar levels in people with type 2 diabetes,” Peterson says. “However, they need to be more careful about blood sugar drops. Episodes of hypoglycemia [too low blood sugar] are more common than usual.”

But fasting with type 2 diabetes can be especially dangerous. It’s best to consult a doctor before trying it.

Intermittent fasting might also slow the aging process and improve longevity, but so far, the only evidence of this is from studies of mice, worms, and other animals. “We’re still in the early phases of doing intermittent fasting research in humans,” Peterson says. “There probably will eventually be a study in older adults to see whether it can slow some indicators of aging, such as the loss of muscle mass.”

How to Get Started
Intermittent fasting can take some adjustment. “It takes your body a little while to get used to that up-down pattern of eating,” Varady says.

You’re likely to be hungry at first. But after about 2 weeks, most people get used to the routine.

In time, fasting could actually help control your hunger. “It may be because your blood sugar levels are more stabilized throughout the day,” Peterson says. And time-restricted feeding causes less hunger than alternate-day fasting, which could make it more sustainable long-term, she says.

One way to avoid hunger during your fast is to drink more water. Extra fluids will also prevent the headaches some people get when they don’t eat.

You might also need to change what you eat. Get more protein from sources like lean poultry, tofu, beans, and nuts. “That helps keep your muscle mass up, because you can lose muscle mass while fasting,” Varady says. It also helps you feel full for longer.

Although many of these diets let you eat what you want during your feast days, don’t go wild and binge. You’ll get the best results if you eat healthy every day.

Who Shouldn’t Fast?
Intermittent fasting is safe for healthy people. Any side effects are usually mild, like constipation and bad breath. Drinking more water can help with both issues.

Certain groups of people shouldn’t fast, though, including women who are pregnant or breastfeeding. Fasting is also not recommended for some people with diabetes, because it can lower your blood sugar to dangerous levels. And avoid fasting if you’re recovering from an illness or being treated for cancer and you need to maintain or gain weight, Peterson says.

This style of eating isn’t a good fit for everyone. Varady doesn’t recommend it for people with binge eating disorder, who could overeat during their “on” days. And if you’re a snacker who can’t go more than a few hours without food, other eating plans might be better for you.