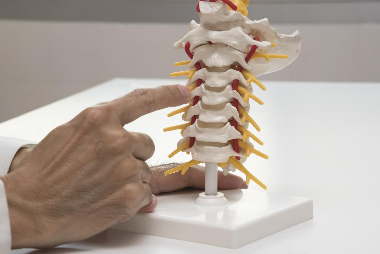 Back and neck pain are often the result of the progressive damage of the discs that separate the spinal vertebrae. Thanks to new multidisciplinary research, we may soon have a better solution to this problem: bioengineered discs grown out of a person’s own cells.

Intervertebral disc degeneration is a common problem that affects a large segment of the population.

Typically, healthy intervertebral discs function by absorbing stress placed on the spine as we move and adjust our posture in a similar way to a car suspension.

If those discs wear out, it can cause pain in various areas of a person’s back or neck.

So far, treatments for intervertebral disc degeneration include spinal fusion surgery and replacing the damaged discs with artificial ones.

However, these approaches bring limited benefits because they cannot restore full function of the intervertebral discs they replace.

Now, a multidisciplinary research team from the University of Pennsylvania’s Perelman School of Medicine, School of Engineering and Applied Science, and School of Veterinary Medicine is aiming to solve this issue by developing bioengineered intervertebral discs made out of an individual’s own stem cells.

Stem cells are undifferentiated cells that have the potential to “transform” into any specialized cells. That is why they have become the focus of multiple medical research studies, including the current one.

The researchers at the University of Pennsylvania have been working for the past 15 years on bioengineered disc models — first in laboratory studies, then in small animal studies, and most recently in large animal studies.

“This is a major step: to grow such a large disc in the lab, to get it into the disc space, and then to have it to start integrating with the surrounding native tissue. That’s very promising,” says Prof. Robert L. Mauck, co-senior author of the current study.

“The current standard of care does not actually restore the disc, so our hope with this engineered device is to replace it in a biological, functional way and regain full range of motion,” he adds.

In the new study, whose results appear in the journal Science Translational Medicine, the team developed the engineered discs even further. They then tested the new model — called ” endplate-modified DAPS” (eDAPS) — in rats again, but this time for up to 20 weeks.

The new structure of the bioengineered disc allows it to retain its shape better, and integrate more easily with the surrounding tissue.

This initial success motivated the research team to study eDAPS in goats, and they implanted the device into the cervical spines of some of the animals. The scientists chose to work with goats because, as they explain, the cervical spinal discs of goats have similar dimensions to those of humans.

Moreover, goats have semi-upright stature, allowing the researchers to bring their study one step closer to human trials.

‘A very good reason to be optimistic’
The researchers’ tests on goats were also successful. They noticed that the eDAPS integrated well with the surrounding tissue, and the mechanic function of the discs at least matched, if not surpassed, that of the original cervical discs of the goats.

“I think it’s really exciting that we have come this far, from the rat tail all the way up to human-sized implants,” says Dr. Harvey E. Smith, co-senior author of the study.

“When you look at the success in the literature from mechanical devices, I think there is a very good reason to be optimistic that we could reach that same success, if not exceed it with the engineered discs.” – Dr. Harvey E. Smith

The researchers say that the next step will include conducting further, more extensive trials in goats, which will allow the scientists to understand better how well eDAPS works.

Moreover, the research team plans to test out eDAPS in models of human intervertebral disc degeneration, thus hopefully getting one step closer to clinical trials.

“There is a lot of desirability to implant a biological device that is made of your own cells,” notes Dr. Smith, adding that, “Using a true tissue-engineered motion-preserving replacement device in arthroplasty of this nature is not something we have yet done in orthopaedics.”

“I think it would be a paradigm shift for how we really treat these spinal diseases and how we approach motion sparing reconstruction of joints,” he continues.