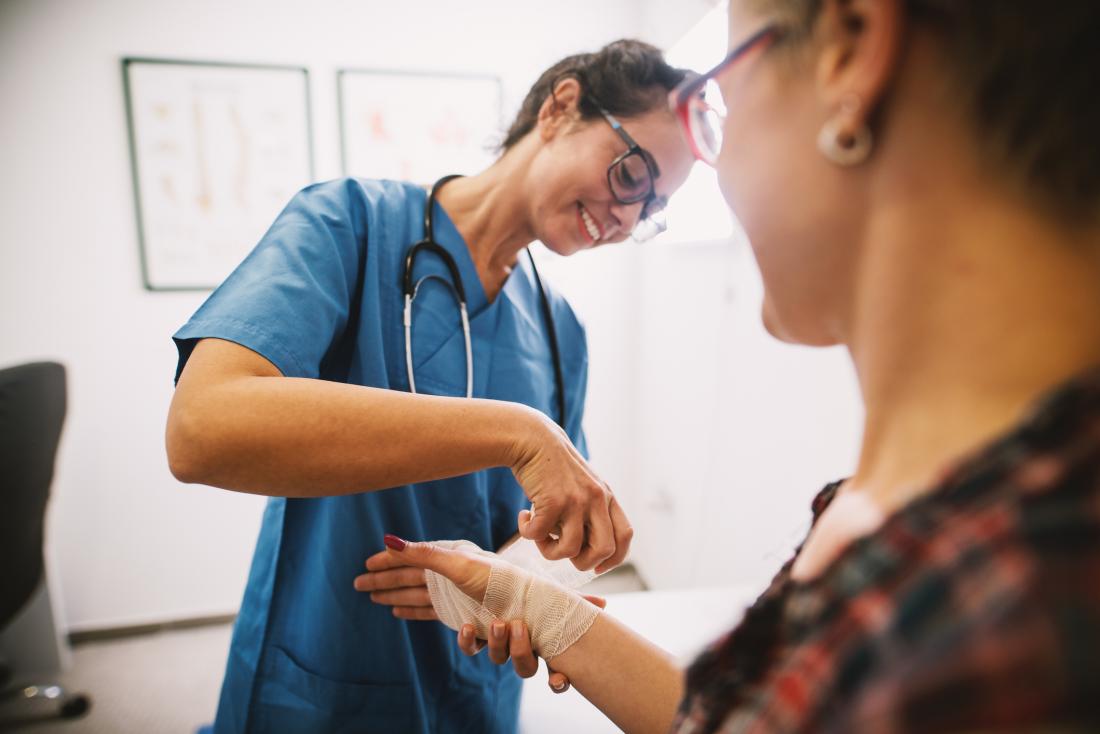 New research, published in the journal Advanced Materials, paves the way for “a new generation of materials that actively work with tissues to drive [wound] healing.”

As more and more surgical procedures are performed in the United States, the number of surgical site infections is also on the rise.

Chronic wounds that do not heal — such as those that occur in diabetes — often host a wide range of bacteria in the form of a biofilm.

Such biofilm bacteria are often very resilient to treatment, and antimicrobial resistance only increases the possibility that these wounds become infected.

According to recent estimates, chronic wounds affect approximately 5.7 million people in the U.S. Some chronic wounds can result in amputations, as is the case with diabetic ulcers.

On a global level, researchers approximate that every 30 seconds a chronic, nonhealing diabetic ulcer causes an amputation.

In this context, there is a dire need for innovative, effective wound healing methods. New research shows promise in this regard, as scientists have devised a molecule that helps harness the body’s natural healing powers.

The molecules are called traction force-activated payloads (TrAPs). They are growth factors that help materials such as collagen interact with the body’s tissues more naturally.

Ben Almquist, Ph.D., a lecturer in the department of engineering at Imperial College London in the United Kingdom, led the new research.

Materials such as collagen are often used in wound healing. For instance, collagen sponges can treat burn injuries, and collagen implants can help bones regenerate.

But how does collagen interact with tissue? In so-called scaffold implants, cells move through the collagen structure, pulling the scaffold along with them. This triggers healing proteins, such as growth factors, that help the tissue regenerate.

In the new study, Almquist and the team engineered TrAP molecules to recreate this natural process. The scientists “folded” DNA strands into aptamers, which are three-dimensional shapes that bind to proteins.

Then, they designed a “handle” for cells to grip. They attached cells to one end of the handle and a collagen scaffold to the other end.

Lab tests revealed that the cells dragged the TrAPs along as they moved through the collagen implants. In turn, this activated growth proteins that triggered the healing process within the tissue.

The scientists explain that this technique recreates healing processes that exist throughout the natural world. “Using cell movement to activate healing is found in creatures ranging from sea sponges to humans,” says Almquist.

“Our approach mimics them and actively works with the different varieties of cells that arrive in our damaged tissue over time to promote healing,” he adds.

A ‘new generation’ of healing materials

The research also revealed that tweaking the cellular handle changes the type of cells that can attach and hold on to the TrAPs.

In turn, this enables TrAPs to release personalized regenerative proteins based on the cells that have attached to the handle.

This adaptability to different types of cells means that the technique can be applied to various types of wounds — ranging from bone fractures to scar tissue injuries caused by heart attacks and from nerve damage to diabetic ulcers.

Finally, aptamers are already approved as drugs for human clinical use, which could mean that the TrAP technique may become widely available sooner rather than later.

“The TrAP technology provides a flexible method to create materials that actively communicate with the wound and provide key instructions when and where they are needed,” explains Almquist.

“This sort of intelligent, dynamic healing is useful during every phase of the healing process, has the potential to increase the body’s chance to recover, and has far-reaching uses on many different types of wounds,” he adds.

The researcher concludes, “[t]his technology has the potential to serve as a conductor of wound repair, orchestrating different cells over time to work together to heal damaged tissues.”