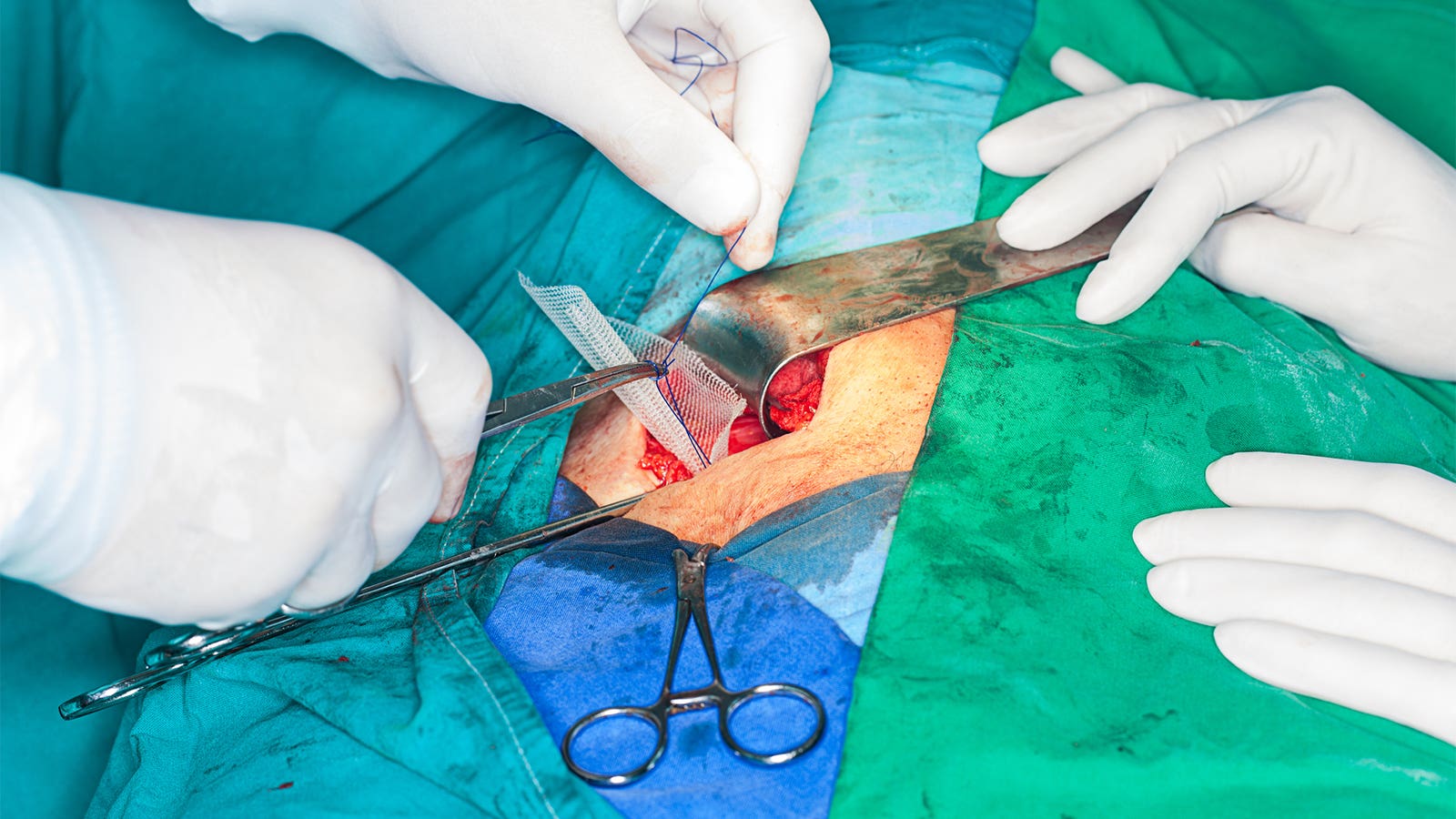 While offering similar clinical benefits at 1 year, a medium-weight polypropylene mesh was no better for pain control than a heavy-weight mesh in patients who underwent open retromuscular ventral hernia repair, a randomized multicenter trial showed.

In fact, for the more than 300 patients in the trial, the two meshes resulted in identical pain scores — on the NIH’s Patient-Reported Outcomes Measurement Information System (PROMIS) Pain Intensity Short Form 3a — at 30 days and 1 year (46.3 and 30.7, respectively), reported David Krpata, MD, of the Cleveland Clinic Center for Abdominal Core Health in Ohio, and colleagues.

“Although we found the absence of any patient-perceived benefits favoring medium-weight mesh surprising, we still find it reassuring that heavy-weight mesh can be used in this context,” the researchers wrote.

“We have been told for years that mesh has been ‘over engineered’ and reducing the weight of the material would lead to improved outcomes and reduced pain over time,” Krpata told MedPage Today. “However, we just didn’t see that.”

A wide variety of polypropylene mesh devices for hernia repair are marketed without optimal use indications, Krpata and colleagues explained. While the risk for hernia recurrence is reduced with heavy-weight meshes — which have a strength up to 10 times an abdominal wall — these meshes also carry long-term complications such as chronic pain.

“The mesh you are choosing and the selection is a deeply personal choice to the surgeon and patient,” said Michael Meara, MD, of the Ohio State University Wexner Medical Center in Columbus, who was not involved in this study.

Patients were blinded to their mesh density, and were undergoing repairs involving surgical incision of 20 cm or less. The main outcome assessed pain using the PROMIS Pain Intensity Short Form 3a. HerQLes scores were generated from a patient survey. Medium-weight mesh density was defined as 40 to 60 g/m2 and heavy-weight mesh was over 75 g/m2.

Mean patient age was 59 and average body mass index (BMI) was 32; half of the participants were women, with baseline characteristics well-balanced between arms. Many of the patients were hypertensive and/or had diabetes, and more than half reported a history of recurrent hernias. Most patients had hernia repair incisions of nearly 15 cm wide. Myofascial advancement flaps were used for all patients.

“I’m selective based on my patient’s BMI,” said Meara. For those with a BMI of 32-35 or higher, a heavy-weight mesh would be preferable, he said. “I think like most studies, you don’t come out of this with an easy decision — both are reasonable and further study is needed.”

The analysis had limitations, the researchers acknowledged, and the results are generalizable to retromuscular mesh placement, but not intraperitoneal placement. Also, chronic pain syndromes were not evaluated.