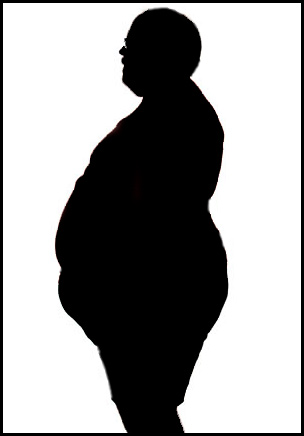 Would you believe me if I told you that at a glance, I could predict your future health? No, I’m not an all-seeing or all-knowing deity of any sort, just a man armed with a medical degree and a heck of a lot of experience in battlefield operating rooms and in some extremely busy emergency rooms. I’ve seen things you wouldn’t want to see. I’ve seen dying and dead men and women, and I’ve seen, in quite a few cases, how they got into that state. I’ve seen their loving families sobbing with the loss of their loved ones. And all I’d have to do to make that determination is to take one look at someone’s body composition and the size of that patient’s waist.

If a patient was in the hospital because of issues related to heart disease or stroke or cancer or complications from diabetes, all I’d need to do is look at the patient’s waistline and I’d know the underlying cause without any blood work being done, or a CT scan or an MRI. I could tell you with certainty that obesity was a profound underlying cause of the state of ill health they’re in.

Medical school gave me a very fundamental lesson regarding body fat: Fat on the outside = fat on the inside (visceral fat), surrounding and choking internal organs. Obesity is the core element in many of the top 10 causes of death in the U.S. as listed by the Centers for Disease Control (CDC). And it’s an underlying cause in all of the diseases I just mentioned. That’s right – even cancer. Obesity increases levels of the hormones estrogen and insulin circulating in the body, which can stimulate cancer growth.

Obesity is the key element we need to focus on fixing as a nation to improve our overall health and longevity.

As a nation, we’ve gotten heavier and heavier (as measured by BMI) every decade since the 1970s. According to a November 2014 report in Advances in Nutrition, an international review journal, “The trend toward increasing portion sizes started in the late 1970s and has been accelerating ever since.”

Last year, NBC News reported that the obesity epidemic hit a new high, with 38 percent of all adult Americans fitting the parameters of being counted as obese — that is with a body mass index (BMI) of more than 30.

A year before, the Centers for Disease Control also reported on the subject of obesity in the U.S. and concluded the following:

And in an earlier article published in the American Journal of Public Health back in 2011, a study that focused on growing food portion sizes compared to the overall increasing weight of Americans showed that “marketplace food portions have increased in size and now exceed federal standards. Portion sizes began to grow in the 1970s, rose sharply in the 1980s, and have continued in parallel with increasing body weights.”

The Journal of Neuroscience did a study on this back in 2012. It found that when people looked at glamorized, stylized, enticing images of food, the reward center of their brains became activated and drove them towards wanting to overeat, which triggered hunger by increasing levels of the hunger hormone, ghrelin.

If all that wasn’t enough to contend with, there’s even more going on that many of us may be unaware of that tries to lure us into eating more and more food: An article last year in the New Scientist was headlined, “Surge in obesity and diabetes could be linked to food additives.” That’s right. In the very first paragraph of that report, we learn that they found “further evidence that emulsifiers, found in most processed foods, might be linked to obesity, diabetes and inflammatory bowel disorders.” Benoit Chassaing, who wrote up the study, said that, “The growing use of emulsifiers has coincided with a rise in obesity and diabetes.”

We’re all in a major food fight, if you will, for our health and longevity. And the food fight ultimately is all about money. We’ve been teamed up on as individuals in a war that is targeting our wallets. Packaged, processed foods are all about making money. They’re all about “enhancing” food and packaging it to target our taste buds and get us hooked on how convenient something is to make and how things taste vs. whether or not something is nutritionally good for us. Lots of factions within the food industry are collaborating in this complicated web of food production in the U.S. to get us hooked on their products.

That said, what are our options? How do we wage battle against such a force?

In a word: education.

Even with standard food portion sizes, according to the U.S. Food & Drug Administration (FDA), we’ve got to be careful. Because what was a standard size as defined by the FDA has also grown to keep up with reality and the actual amounts of food that U.S. consumers eat. For example, the FDA used to define four single servings in a pint of something (ice cream, for example) and now there are just three servings in that same pint. So the standard serving size has grown as well as the number of calories per serving. A fourth of a pint single serving size at 200 calories (4×200=800) has now grown to a third of a pint single serving size at about 270 calories (3×270=810). That’s an increase of single-serving caloric intake of 35 percent. Take a look at this chart of a sampling of popular food sizes comparing them from 20 years ago to today: Perspectives in Public Health — The Portion Size Debate. Everything is growing.

We must all arm ourselves for that food fight as a population and think about what we’re buying at the grocery store or market and what we’re putting into our bodies. It’s not about dieting, it’s about selecting the right foods that will help ward off most of those top ten killers of humans living in the U.S. According to the CDC (Centers for Disease Control), the top 10 leading causes of death in America are:

Taking control of our food consumption can with certainty eliminate at least half of these top ten leading causes of death.

Obesity is excessive accumulation of body fat that leads to failing health, disability, increased morbidity and mortality, and we each have the power to change that. We all need to THINK about what we’re eating, why we’re eating it, and what the benefit (or, all too commonly, lack of benefit) of eating something will be. We need to think about what the food we ingest will do to our bodies. And we need to think about our entire food chain and the sources of our food.

Studies bear this out: a shift of our Standard American Diet (SAD) of reliance on animal proteins and fats and processed, boxed foods to one much higher in vegetables, whole grains and fruits will help us stem the rising tide of obesity in America. Take a look, for example, in one of the “Blue Zones” in the world. A Blue Zones is a place in the world where people are 10 times more likely to live to the age of 100. One of those Blue Zones is Okinawa, one of the islands that make up the country of Japan. Okinawans are among the healthiest and longest living people in the world. According to a report in the popular website, Forks Over Knives (which grew from the documentary of the same name – highly recommended if you haven’t seen it yet), which advocates for a plant-based diet, they are able to live a high quality of life even as they continue to age. Almost two-thirds of the population function independently at age 97, reported Forks Over Knives.

What do the Okinawans eat? The local government has been keeping records since 1949. This is what their diet looked like at that time (based on percentage of whole calorie intake):

All that makes a calorie intake of 85% carbohydrates, 9% protein, and 6% fat. And Okinawans practice the concept of hara hachi bu – eating until they’re 80 percent full. We eat too much in this country and are not good at recognizing when we are stuffed (the signal of fullness to the brain is delayed about 20 minutes, which for some could mean another two or three courses). Food is readily available in our society, and we don’t need activity (exercise) to obtain it.

If we take back control of our food consumption, add more vegetables and fruit to our daily diet and dial back on animal proteins and fats, we will have gone a long way towards reclaiming a long, healthy life and pushing health concerns as we age into the background; we can eliminate or at least reduce expensive treatments, pills, surgeries and complications. Exercise is the other half of the obesity-prevention equation – however, it is much easier to eat less than to burn off through exercise what you’ve eaten, which is why we are focusing on that in this write up. Think about it: a blueberry muffin at a popular coffee spot packs around 350 calories. Running a mile in 12 minutes on flat terrain will burn about 120 calories. You can do the math. It takes some time to burn off calories through exercise.

No one expects us all to be 100 percent buttoned up and on point in our diet, eliminating all burgers, pizzas, breads, pies, cookies and candies completely from our diets — we just have to be smart about consuming those kinds of things, if we want to. After all, an occasional slice of cheesecake, a donut or a few cookies won’t hurt too much. And who can resist?

If we educate ourselves and pay attention to consuming more vegetables and fruits, focus on proper portion size and eliminating as many food additives as possible, it is within our power as a nation to dial back the decades-long trend of burgeoning obesity, and I firmly believe we can.

To learn more about Dr. Sudip Bose, MD, please go to SudipBose.com and visit his nonprofit TheBattleContinues.org where 100% of donations go directly to injured veterans