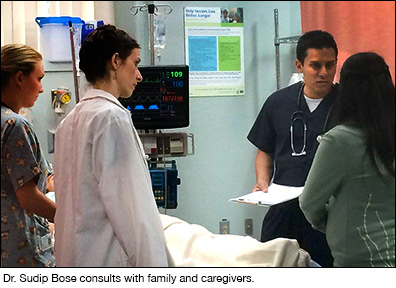 We need to talk about death.

It’s certainly not easy to talk about death and dying in America. It’s immeasurably harder for one to go through a terminal illness.

Where there is life, there is death. It is inevitable for us all; yet as a society, we speak of it with hand over mouth – in hushed tones, as if the mere verbalization of it would bring it upon us. In America, we don’t deal with death very well. We want to believe that we will live to grow old and that death will be a quick and sudden event. That’s not always the case. It’s not a fun topic to talk about, and therefore we don’t talk about it nor do we plan for it properly.

We’ve got to get better about that. We’ve got to be open and honest about it. Because in the United States, we plan for death poorly or not at all. As an emergency physician, I’ve seen countless patients struck with a terminal illness, which has left families scrambling at the end of a loved one’s life trying to figure out what to do and struggling with life or death decisions. No one wants to feel like they have to step in and play God at that time. It puts family members in the position of trying to figure things out while they are in a highly emotional, stressed state. People usually don’t make the best decisions while distressed.

Family members often have a feeling of guilt if they haven’t discussed end-of-life care at some point, either before or during a terminal illness. They believe they should be doing everything possible to keep their loved one alive. But is that what the patient would want? Does it lead to a better quality of life? Is the patient unnecessarily suffering?

I once had a patient who had been declining in health for years. She was completely bedridden in her last days – couldn’t eat, go to the bathroom, etc. She was dying. It finally came to the point where she had to be put on a bipap air flow machine to keep her alive. The family knew that they didn’t want to put her on a ventilator, and they knew that if they removed the bipap machine, she wouldn’t survive. However, with a bipap machine, a patient can typically only go a maximum of about five days because it provides too much pressure and would cause damage to the patient’s face. The woman’s family ended up keeping her on the machine for the maximum amount of days. Understandably, it was difficult for the family to ultimately let their loved one go. But did it do much for the patient to lie there with a bipap mask on for the full five days? Was she just suffering even more by keeping the mask on? Were hospital resources used unnecessarily? Is that what the patient really would have wanted?

We should make an effort to talk about possible end-of-life decisions or scenarios with our loved ones. We should talk about and understand how each of the following items could play a role as a person approaches death:

Also in the context of dying and end-of-life choices, we need to talk about the subject of palliative care and get comfortable with that concept. Palliative care is defined as the act of giving medical care to someone with a serious illness without actually dealing with the cause of the condition. It’s care that’s intended to alleviate a patient’s symptoms with the goal of improving quality of life, and often is associated with relief from pain. Yet all too often in America when palliative care is mentioned as a way to ease a person’s descent into death, we use those words almost euphemistically – we use the words “palliative care” as code words for death.

I’m not talking about actively hastening a patient’s death, I’m talking about giving a patient the highest quality of life possible as he or she faces a terminal illness. In the truest sense, palliative care is appropriate at any stage of a serious illness, absolutely can work in conjunction with curative treatment and should not ever hasten death.

Here are some select bullet points regarding palliative care as defined by WHO (the World Health Organization):

I heard something recently that caught my attention. It was in the trailer for the soon-to-be-released documentary film, “Eating You Alive.” The quote came from Randy Titony, a self-described plant-based evangelist who is certified in plant-based nutrition and also is a physical therapist professional. He said, “People aren’t living longer; they’re dying longer.”

That struck me as a very interesting perspective.

If you talk to a hospital administrator or any politician in about dying in America, they might point out that a full quarter of traditional Medicare spending is provided to beneficiaries in the last year of life. They might note data that shows that spending for this cohort is four times higher for those who died at some point during the year compared to those who lived the entire year. And they’ll very likely talk about unnecessary care and overtreatment. Yet time and again, attempts to roll back such “aggressive” care are thwarted by talk of death panels and accusations of rationing care.

According to Dr. Jordan Grumet, a leading palliative care specialist and hospice medical director in Northbrook, Ill., who also writes on the subject, dying has become miserable because we eschew dignity and turn it into a high-tech, costly, drawn-out, process.

As Grumet sees it, focusing on finances is misplaced. “Improving the end of life experience is bound to fail if we focus on finances,” he said. “No one wants to feel like they are dying on the cheap.”

Instead, he believes we need to concentrate on the concept of dignity. In short, he thinks we need to die better.

I would agree. Time and again I’ve seen people unprepared for death – patient and family alike – and unprepared even for its approach and the management of issues associated with that.

If we focus on high-quality interventions at the end of life, things like aggressive pain control, counseling, and symptom management, and at the same time minimize low-yield treatments that increase pain and suffering – like surgery and chemotherapy, for example – could we affect and reverse those trends cited in the previous paragraph? Things like surgery, chemotherapy, diagnostic imaging ― although often utilized during the last months of life ― infrequently improve outcomes and can prolong discomfort. This should be a process of shared decision making with the family and loved ones.

The result of this sort of treatment flip, if you will, would be that patients embrace and even enjoy the last stages of life. Says Grumet: “We help them die with the same dignity that they strove to live … and, believe it or not, that might actually save our health care system some money.”

It might even have a positive effect on the course of a patient’s illness.

Palliative care providers agree. Financial concerns are very real and no one wants to make decisions based on money as someone’s life appears to be slipping away. But with the medical system’s focus on treatments regardless of cost (driven largely by medical malpractice and legal concerns) coupled with the lack of discussion families have around end-of-life issues, patients and families alike frequently do not get the kind of care they hope to get.

In an article published in 2012, Money magazine quotes Ira Byock, director of palliative medicine at Dartmouth-Hitchcock Medical Center and author of “The Best Care Possible”:

“When patients have a terminal illness, at some point more disease treatment does not equal better care.”

The key is for families to discuss end of life issues and keep communication open with their loved ones going through it. In my career, it’s been interesting to watch how people handle the end of life process – when they have any control over it. I’ve known a man in his mid-80s who was battling Parkinson’s disease who made the decision that he was ready to die. Despite the efforts of medical personnel and family members, he suddenly refused to eat, drink or take any medication. He couldn’t speak, but he knew what he was doing and family members came to understand that. He died within a day and a half.

Others will desperately cling to life, not wanting to go – hanging on without food or water for days and weeks. The importance of the possibility of one more day seeing a father, a mother, another day seeing a brother, a sister, a grandson, a son or daughter, might suddenly become a reason for living — a very powerful reason for fighting for life.

A study done by Diane E. Meier, Director of the Center to Advance Palliative Care, Professor of Geriatrics and Palliative Medicine at the Icahn School of Medicine at Mount Sinai, published in September 2011 in the Milbank Quarterly, reported the following in her findings: “Palliative care and hospice services improve patient-centered outcomes such as pain, depression, and other symptoms; patient and family satisfaction; and the receipt of care in the place that the patient chooses. Some data suggest that, compared with the usual care, palliative care prolongs life. By helping patients get the care they need to avoid unnecessary emergency department and hospital stays and shifting the focus of care to the home or community, palliative care and hospice reduce health care spending for America’s sickest and most costly patient populations.”

It’s amazing how precious life is, and how much you will fight to hold on to it when the fight is still in you, and how quickly it can go when there’s no fight left. Every patient, family, case and doctor is different. The key thing is to get education around palliative care and end of life care, have open and frank discussions, and memorialize your decisions and preferences in medical records and documents such as a living will, for example, and make sure your doctors and other care providers know what your wishes are.

From the previously cited Money magazine article: “A 2010 study in the Journal of Palliative Medicine found that only 15 to 22 percent of seriously ill elderly patients had their preferences in their medical records.” And, “studies by the Agency for Healthcare Research and Quality show that 65 to 76 percent of doctors whose patients had documents outlining end-of-life wishes weren’t aware they existed.”

Families need to engage amongst themselves and with their care providers in advance about the implementation – or not – regarding palliative care. It’s not only a treatment and financial decision, but a quality of life decision as well.