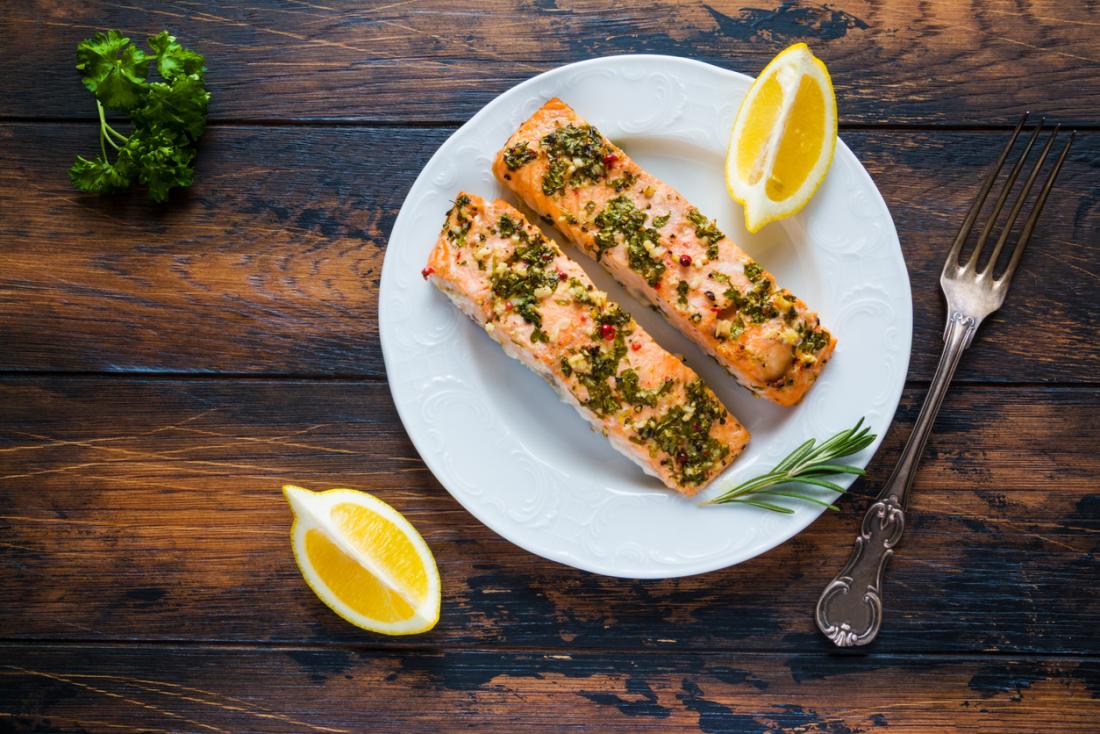 Here are some key points about fish oils. More supporting information is in the main article.

What are omega-3 fatty acids?

Docosahexaenoic acid (DHA): In humans, this omega-3 fatty acid is a key part of sperm, the retina, a part of the eye, and the cerebral cortex, a part of the brain.

DHA is present throughout the body, especially in the brain, the eyes and the heart. It is also present in breast milk.

Some studies have concluded that fish oil and omega-3 fatty acid is beneficial for health, but others have not. It has been linked to a number of conditions.
Multiple sclerosis

Fish oils are said to help people with multiple sclerosis (MS) due to its protective effects on the brain and the nervous system. However, at least one study concluded that they have no benefit.
Prostate cancer

One study found that fish oils, alongside a low-fat diet, may reduce the risk of developing prostate cancer. However, another study linked higher omega-3 levels to a higher risk of aggressive prostate cancer.

Research published in the Journal of the National Cancer Institute suggested that a high fish oil intake raises the risk of high-grade prostate cancer by 71 percent, and all prostate cancers by 43 percent.
Post-partum depression

Consuming fish oils during pregnancy may reduce the risk of post-partum depression. Researchers advise that eating fish with a high level of omega 3 two or three times a week may be beneficial. Food sources are recommended, rather than supplements, as they also provide protein and minerals.
Mental health benefits

An 8-week pilot study carried out in 2007 suggested that fish oils may help young people with behavioral problems, especially those with attention deficit hyperactivity disorder (ADHD).

The study demonstrated that children who consumed between 8 and 16 grams (g) of EPA and DHA per day, showed significant improvements in their behavior, as rated by their parents and the psychiatrist working with them.
Memory benefits

Omega-3 fatty acid intake can help improve working memory in healthy young adults, according to research reported in the journal PLoS One.

However, another study indicated that high levels of omega-3 do not prevent cognitive decline in older women.
Heart and cardiovascular benefits

Omega-3 fatty acids found in fish oils may protect the heart during times of mental stress.

Findings published in the American Journal of Physiology suggested that people who took fish oil supplements for longer than 1 month had better cardiovascular function during mentally stressful tests.

In 2012, researchers noted that fish oil, through its anti-inflammatory properties, appears to help stabilize atherosclerotic lesions.

People with stents in their heart who took two blood-thinning drugs as well as omega-3 fatty acids were found in one study to have a lower risk of heart attack compared with those not taking fish oils.

The AHA recommend eating fish, and especially oily fish, at least twice a week, to reduce the risk of cardiovascular disease.
Alzheimer’s disease

For many years, it was thought that regular fish oil consumption may help prevent Alzheimer’s disease. However, a major study in 2010 found that fish oils were no better than a placebo at preventing Alzheimer’s.

Meanwhile, a study published in Neurology in 2007 reported that a diet high in fish, omega-3 oils, fruit, and vegetables reduced the risk of dementia and Alzheimer’s.
Vision loss

A 2014 study published in the Journal of Neurology, Neurosurgery & Psychiatry claims that people with epilepsy could have fewer seizures if they consumed low doses of omega-3 fish oil every day.
Schizophrenia and psychotic disorders

The fillets of oily fish contain up to 30 percent oil, but this figure varies. White fish, such as cod, contains high concentrations of oil in the liver but less oil overall. Oily fish that are rich in omega-3 fatty acids include anchovies, herring, sardines, salmon, trout, and mackerel.

Other animal sources of omega-3 fatty acids are eggs, especially those with “high in omega-3” written on the shell.

Vegetable-based alternatives to fish oil for omega 3 include:

A person who consumes a healthful, balanced diet should not need to use supplements.

Taking fish oils, fish liver oils, and omega 3 supplements may pose a risk for some people.

It is important to note that the FDA does not regulate quality or purity of supplements. Buy from a reputable source and whenever possible take in Omega 3 from a natural source.

The AHA recommend shrimp, light canned tuna, salmon, pollock and catfish as being low in mercury. They advise avoiding shark, swordfish, king mackerel, and tilefish, as these can be high in mercury.

It remains unclear whether consuming more fish oil and omega 3 will bring health benefits, but a diet that offers a variety of nutrients is likely to be healthful.

Anyone who is considering supplements should first check with a health care provider.