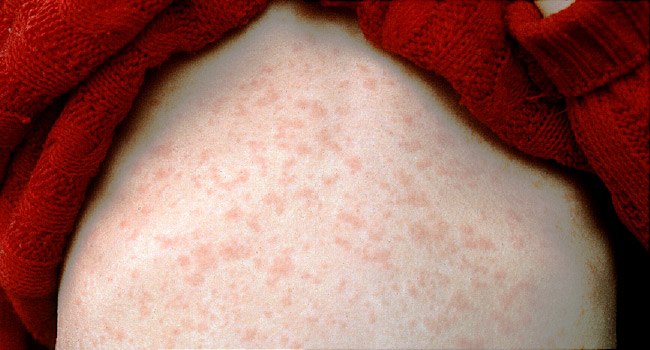 Note: This story was updated April 22, 2019, with additional cases reported and April 18, 2019, with statistics on reported measles cases worldwide.

April 11, 2019 — Measles cases have been skyrocketing in the U.S. this year, with 626 reported so far, according to the CDC. Worldwide, the number of reported cases jumped 300% in the first three months of 2019 compared to the same time period in 2018, according to the World Health Organization. Learn why it’s happening and how to protect your family from this potentially deadly disease.

Measles is a contagious disease spread by a virus. It’s so contagious that when someone has measles, 90% of the people around them who aren’t immune will also catch it. And it’s so serious that one in four people who get measles will need to be hospitalized.

What are the symptoms of measles?

Seven to 14 days after exposure, symptoms begin with a high fever, cough, runny nose, and red, watery eyes. Several days after that, the measles rash appears.

Why has measles come back?

Measles was declared eliminated in the U.S. in 2000, 3 decades after the vaccine was introduced. But in recent years, “A critical number of parents have chosen not to vaccinate their children,” says Paul Offit, MD, director of the Vaccine Education Center at Children’s Hospital of Philadelphia. “When that happens, measles — the most contagious of vaccine-preventable illnesses — is often the first to come back.”

Where have there been measles outbreaks 2019?

The CDC defines an outbreak as three or more cases . The largest outbreak this year has been in New York City, with nearly 300 cases concentrated in an Orthodox Jewish community in the Williamsburg area of Brooklyn. New York City Mayor Bill de Blasio declared a public health emergency April 9 and said unvaccinated residents living in certain ZIP codes that had been exposed to the virus must get the vaccine to help prevent further spread of the disease. Residents who refuse may face a violation and possible fine of $1,000. A group of parents is suing the city’s public health department to block the order.

Rockland County, north of the city, also had a sizable outbreak, as did counties in Washington state, Michigan, New Jersey, and California. Individual cases have been confirmed in 14 other states.

How dangerous is it?

For some people, measles brings far more than just a fever and a rash. There is no treatment, and it can cause serious health complications, especially in small children. Currently, five patients in New York City have been admitted to the intensive care unit. In general, one out of every 10 children with measles get an ear infection, which can lead to permanent hearing loss. And one or two out of every 1,000 will die.

Who’s most at risk of measles?

About 500,000 people in the U.S. can’t be vaccinated because of severe allergies or a weakened immune system, says. Offit. Those people rely on everyone else’s vaccinations to protect them, in a concept known as community (or herd) immunity. Community immunity also keeps infants safe, since the vaccine isn’t given until a child is a year old.

How is measles spread?

People with measles can spread the disease up to 4 days before their symptoms appear. When an infected person coughs or sneezes, the virus sprays into the air, where it lingers or lands on surfaces. The virus can live outside a human body for up to 2 hours — so even if you enter an empty room, if you don’t have immunity, you can become infected.

What is the chance that measles will spread more widely?

If more parents refuse to vaccinate their children, the disease could become a constant threat.

When is the measles vaccine given?

The vaccine is usually given to children between the ages of 1 and 6. To be most effective, they’ll get two doses: the first at 12 to 15 months, and the second between ages 4 and 6. That second dose can be given as soon as 28 days after the first dose, if necessary.

If every unvaccinated person got vaccinated, would it stop the spread?

Absolutely, says Offit. “Measles is back because we haven’t learned from history. And it’s the children who suffer for our ignorance.”

Before there was a vaccine for chickenpox, parents would bring children to the home of a child who had the pox to expose them on purpose. (Chickenpox can become more serious in adults.) Now, some parents who refuse vaccinations for their children are doing the same with measles. Offit says this is extremely dangerous. “Why risk a natural infection, knowing it could mean your life?”

Does the vaccination I got as a child still protect me?

In most cases, yes. Only about three people out of every 100 who get both doses of the vaccine will still get measles after exposure. One caveat: If you received the vaccine in its early days, between 1963 and 1967, you may need to be re-vaccinated. Certain vaccines given in those years were not effective.

What should you do if you think your child has been exposed?

Call your pediatrician right away, Offit says. The risk will depend on several things, which your doctor will assess. Do not wait for symptoms.