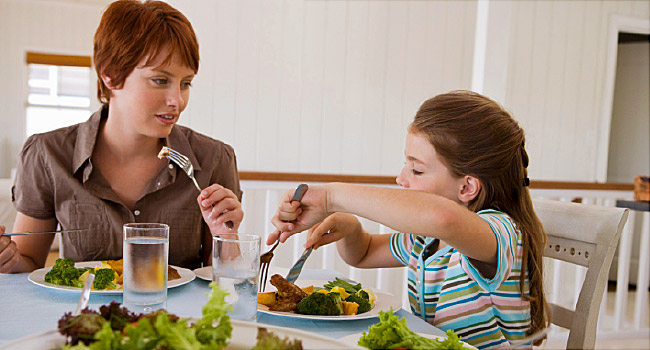 People who eat more home-cooked meals had lower levels of hormone-disrupting PFAS chemicals in their blood compared to others, according to a new study.

The study — which drew its data from the government’s long-running National Health and Nutrition Examination Survey — compared blood levels of certain kinds of per- and polyfluoroalkyl (PFAS) substances to the foods people said they remembered eating on dietary questionnaires between 2003 and 2014.

The most important finding of the new study is that it showed people who tended to eat more fresh food and food prepared at home had slightly lower levels of five “long-chain” PFAS chemicals in their blood, compared to those who ate more of their meals at fast-food and other types of restaurants. The study was observational, which means it can’t show cause and effect.

PFAS blood levels tested in the study have been dropping over past 2 decades, as chemical manufacturers have voluntarily phased out the production of some kinds — the “long-chain” ones. In 2016, the FDA revoked regulations that allow long-chain PFAS chemicals in food packaging.

But shorter-chain PFAS chemicals have replaced them in many products, and researchers say not enough is known about whether these compounds are any better for the environmental or our health. The CDC calls the chemicals a “public health concern” and says more research is needed to better understand the health effects of PFAS exposure.

Experts who were not involved in the study say it is useful because it shows that food choices can impact the chemical loads we carry in our bodies.

“Making food at home minimizes contact with food packaging and exposure to chemicals that affect the developing thyroid gland and are associated with a host of health consequences,” says Leonardo Trasande, MD, a professor of pediatrics and environmental medicine at New York University’s Langone Health. He’s also wrote a book called Sicker, Fatter, Poorer, about how hormone-disrupting chemicals affect your health.

There are thousands of different kinds of synthetic PFAS chemicals. They have been used since the 1950s to make products such as stain-resistant carpets, cosmetics, waterproof fabrics, and nonstick cookware. They have contaminated water supplies because of the heavy use of firefighting foams that contain PFAS.

PFAS chemicals leach into food through wrappers and containers that are coated to make them grease-proof. They may also creep into food during processing.

They’re sometimes called “forever chemicals,” because many don’t break down in the environment. They take years to break down in our bodies.
Previous studies have shown PFAS chemicals can interfere with a body’s natural hormones and may make it harder to get pregnant. They’ve been linked to growth and learning problems in kids. They may cause problems with the immune system such as reducing the body’s response to vaccines. Other studies have linked them to increased cholesterol levels and cancer.

PFAS chemicals may even influence body weight. A 2018 study by researchers at Harvard and Pennington Biomedical Research Institute found that people with higher PFAS levels were more likely to regain lost weight, possibly because of changes to their resting metabolic rate — the number of calories the body burns at rest.

Scientists: Watch What You Eat

Researchers say it stands to reason that eating less packaged and processed food could cut a person’s exposure.

The study also found that people who reported eating more fish and shellfish were more likely to have higher PFAS levels. That finding isn’t surprising. Previous studies have found that larger fish take on the chemicals of the smaller fish they eat. So larger predatory fish can wind up with substantial amounts of PFAS in their flesh, which would otherwise be healthy to eat.

Trasande says the solution to that is to eat smaller fish, like sardines, and smaller shellfish, like shrimp and scallops.

Popcorn was another big culprit.

“We found a strong association with microwave popcorn,” Schaider says. Levels of one kind of PFAS chemical, called PFDA, were 63% higher in those who reported eating popcorn at least once daily over the past year. Surveys showed most of the popcorn eaten in the study was microwave popcorn.

Schaider says that while that’s not great news, there are easy substitutes.

“I personally have high blood pressure, so I make popcorn on the stove,” she says.

If you want to stick with your microwave, you can add unpopped kernels to a plain brown paper bag to avoid PFAS chemicals. Schaider says previous testing of these kinds of bags didn’t detect any PFAS chemicals in them.

Trasande says the study is straightforward.

“It shows that the decisions about what we eat and where that food comes from can have measurable changes on our PFAS exposures,” he says.

The FluoroCouncil, an industry group that represents companies that make fluoropolymer products, says the use of PFAS chemicals in food packaging is safe.

According to a statement posted on the group’s website: “The use of PFAS in food packaging is strictly regulated by the FDA, which has determined the specific PFAS currently used are safe for their intended use. In addition, a robust body of scientific data demonstrates these FDA-reviewed PFAS substances do not pose a significant risk to human health or the environment.”