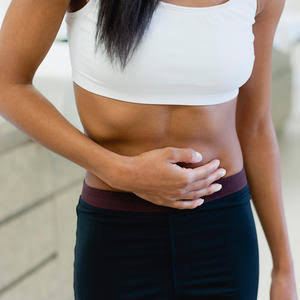 Your period and all that comes along with it is enough to make you want to ditch the gym and stay in bed with a hot compress and a bag of salt-and-vinegar chips. But that bag of chips isn’t doing that belly bloat any favors—while a good sweat sesh can. Here’s what you need to know about working out on your period.

Working Out on Your Period? What Type of Exercise You Do Matters

Don’t get us wrong, you earn yourself a fist-bump just for getting your butt to the gym. Any exercise is better than none—especially when you’ve committed to working out on your period—but if you’re looking to get the most sweat-equity for your efforts, then make this workout a high-intensity one. “Higher-intensity exercise can release more endorphins, which are the feel-good chemicals released in our brains when we exercise,” says Alyse Kelly-Jones, M.D., an ob-gyn at Novant Health Mintview OB/GYN. Endorphins help relieve pain and get rid of prostaglandins, which are chemicals that are produced during menstruation (and at other times, like when you get injured) that can cause inflammation, muscle contractions, pain, and fever. So the more endorphins you release, the less period pain you feel. (You’ll also score these eight major benefits of HIIT training at the same time.)

Another reason to go for box jumps over yoga? Sex hormones. Progesterone and estrogen levels are actually at their lowest point during menstruation, says Kelly-Jones, and that means your body is able to access carbohydrates and glycogen more easily than they can when estrogen is at an all-time high (the middle of your cycle). That means the fuel your body needs to power through an intense set is more readily available, and you can push harder to get the most out of short bursts of fast-paced movements.

Cardio Is Better Than Strength Training

If your goal is to alleviate PMS symptoms, then the week of your period is when you should focus more on the treadmill and less on the barbell. Research shows that there’s a direct correlation between aerobic capacity and the severity of PMS symptoms: When your aerobic exercise goes up, the PMS symptoms go down. But when the scientists looked to see if the same thing happened with anaerobic power—so, strength training—they found that there was no significant connection between the two variables.

Not to mention that your body temperature is actually lower when you’re on your period, thanks to the drop in hormones. This increases the amount of time it takes your body to tire, and you can store more heat without exhausting your central nervous system. What that means for you: Those sprint intervals are going to feel easier than they did mid-cycle. (Related: How to Make the Most of Sprint Interval Workouts)

Workout Out On Your Period Won’t Lighten Your Flow

The first few days, when your period is usually the heaviest, is when you’re probably least likely to book a TRX class. But if that’s part of your regular routine, then it could pay off to go anyway. Kelly-Jones says that regular, moderate exercise could reduce your flow each month, making it a solid preventative method. That’s because “estrogen is decreased when body fat is decreased, and estrogen stimulates growth of the uterus lining [that you shed when you have your period],” she explains. Translation: Regular exercise (plus a healthy diet) can mean less body fat, which means less estrogen and a lighter menstrual flow.

Unfortunately, that TRX class won’t have an immediate impact on your flow, says Kelly-Jones. “Once the cycle starts, it’s going to be what it is,” she says. Since your uterus lining has already been thickened throughout the month, by the time you get your period it’s simply in the process of shedding it because you’re not pregnant. So working out on your period won’t change how heavy things are flowing right now. (Also worth noting: everything you need to know about having sex on your period.)

But It Can Help With Other Symptoms

Working out on your period can help with other symptoms, though, like that god-awful belly bloat. “As you sweat during exercise, your body is shedding water, which may relieve some bloating,” says Kelly-Jones. “There have [also] been studies that connect a higher level of overall physical fitness with fewer PMS symptoms.” Case in point: Research published in the Crescent Journal of Medical and Biological Sciences shows that if you work out three times a week, specifically making time for moves that get your heart rate up, then symptoms like headache, fatigue, and breast pain can be lessened.

You’re Not More Likely to Get Injured

Yes, it’s a good idea to squeeze in a quality HIIT session when working out on your period. And no, there is no reason to worry about an increased risk of injury. “Adjusting your activity while you have your period is really a myth,” Kelly-Jones says. “Everything is fair game, unless you bleed very heavily and become anemic. Then you might feel more fatigued,” so you may not be able to go as hard as you normally do.

Research backs her up: While scientists have found that women are more likely to get ACL injuries at certain points of their cycle, that risk increases during the preovulatory phase, which is when hormones start being produced again, the ovaries are stimulated, and an ovarian follicle starts to mature. That typically occurs from days 9 to 14 of a 28-day cycle, so yeah, it’s after you get your period (the first day of your period is considered day one of your menstrual cycle, Kelly-Jones explains).

Not to mention that, even though a woman’s risk of injury is higher, research also shows that neuromuscular training can cut that risk in half. Researchers discovered that the risk increases because there’s a difference in the way women’s knees move during menstruation compared to ovulation. But Timothy E. Hewett, Ph.D. (who’s been studying the effect of the menstrual cycle on injury for more than 15 years), found that when athletes were taught how to reduce load on their knees and ankles and build up strength and coordination, the rate of ACL injury, ankle injury, and knee-cap pain fell by 50 to 60 percent. So simply strengthening and learning how to properly move your body while you work out can help—period or not. (Related: Does It Matter What Order You Perform Exercises In a Workout?)

In other words, have no fear and keep on busting reps like your badass self.

Unless you have extremely heavy bleeding, like Kelly-Jones mentioned above, it’s not likely that your performance will be impacted. After surveying 241 elite athletes about how their menstrual cycle affected their performance, researchers noted that about 62 percent of them thought their workout was just as good when they had their periods compared to when they didn’t. (Plus, 63 percent of them said their pain decreased during training and competition as opposed to recovery time.) And lest you think they’re simply better at powering through because they’re elite-level, know that that just isn’t so. Another study from West Virginia University found that, when analyzed during both the first and second half of their menstrual cycles, female runners still performed just as well on their periods as they did when off. So go on and grab those sneaks—it’s time to start sweating.