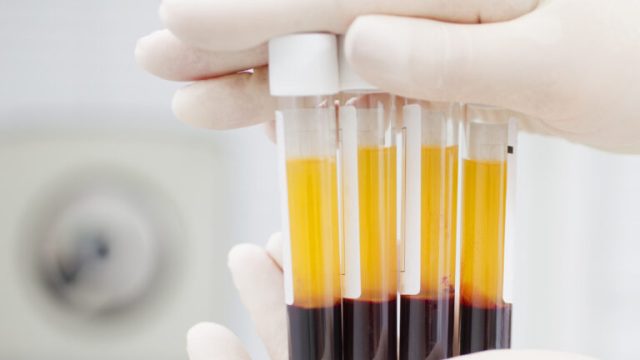 Some researchers and doctors have started using plasma from people recovering from COVID-19 to treat others who have developed the disease. Medical News Today spoke to Dr. Arturo Casadevall, from Johns Hopkins University, to learn more about this approach.

In the search for an effective treatment for COVID-19, an old method of fighting infectious diseases has recently resurfaced: transfusions with convalescent plasma. Plasma is a component of blood.

This method has a simple premise. The blood of people who have recovered from an infection contains antibodies. Antibodies are molecules that have learned to recognize and fight the pathogens, such as viruses, that have caused disease.

Doctors can separate plasma, one of the blood components that contain such antibodies, and administer it to people whose bodies are currently fighting an infectious disease. This can help their immune systems reject the pathogen more efficiently.

Recently, researchers and healthcare professionals have been looking into the possibility of using this method to treat people with COVID-19, the respiratory disease caused by the SARS-CoV-2 virus.

In the United States, a group of researchers and doctors from 57 institutions, including Johns Hopkins University, the Albert Einstein College of Medicine, and the Icahn School of Medicine at Mount Sinai, are investigating and applying convalescent plasma therapy for COVID-19.

This is a concerted initiative — called the “National COVID-19 Convalescent Plasma Project” — born after the publication of a viewpoint paper in The Journal of Clinical Investigation in March, 2020.

The paper argued for the potential merits of passive antibody therapy in the treatment of COVID-19. It was authored by immunologists Dr. Arturo Casadevall, chair of the Molecular Microbiology & Immunology Department at Johns Hopkins Bloomberg School of Public Health, and Dr. Liise-anne Pirofski, professor of Infectious Diseases in the Department of Medicine at the Albert Einstein College of Medicine.

To understand more about convalescent plasma therapy, its merits, its risks, and its current use in COVID-19 treatments, Medical News Today recently spoke to Dr. Casadevall.

Here is what he told us, alongside more information on the current state of convalescent plasma therapy.

A therapy ‘used for over 100 years’
So, where did the idea of using convalescent plasma, or passive antibody therapy, come from?

This notion was first introduced in the late 19th century when physiologist Emil von Behring and bacteriologist Kitasato Shibasaburou discovered that they could use antibodies present in serum — another blood component — to fight the bacterial infection diptheria.

Since then, doctors have used passive antibody therapy, on and off, at least since the 1930s to treat or prevent both bacterial and viral infections, including forms of pneumonia, meningitis, and measles.

When we asked him how the idea of using convalescent plasma therapy to treat COVID-19 came about, Dr. Casadevall told us: “I have worked on antibodies my entire life professional life […], and I knew that convalescent plasma — or sera […] — was being used for over 100 years.”

“In fact, the first Nobel Prize was given [to Behring] for the use of serum to treat diphtheria, so I knew the history.” This long history of successfully using this method against different infectious diseases suggested that it might also be effective against the disease caused by SARS-CoV-2.

“I knew that in epidemics when you don’t have a lot of things, […] the blood of those who recover can have antibodies that can be used [as treatment],” Dr. Casadevall explained.

“So it’s an old idea, it’s been around for a long time, and I think that my contribution was, in fact, to alert my friends, authorities, that this [therapy] could be used in this epidemic.”

Recent research has already shown that people who have contracted SARS-CoV-2 have developed antibodies that can react to the coronavirus.

“There [are] now multiple studies that have shown that when people recover from the virus, they have in their blood neutralizing antibodies that are able to kill the virus,” Dr. Casadevall also told MNT.

Although “[p]eople differ greatly in the amount of antibodies that they make — some make large amounts, some make small amounts — […] the good news is that most have [them],” he added.

Given the willingness of people who have recovered from COVID-19 to donate blood, the method seems feasible right now. In fact, some doctors are already using convalescent plasma therapy in some cases.

Settling the matter of safety
In the U.S., the National COVID-19 Convalescent Plasma Project have already been trialing this method as widely as possible.

Dr. Casadevall told MNT that “in the United States, we have close to 12,000” people who have received the convalescent plasma treatment for COVID-19.

Based on the data obtained from a little less than half of this cohort, Dr. Casadevall and his colleagues have concluded that this approach is safe for the patients receiving treatment — the first step necessary before ascertaining the method’s effectiveness.

The team has reported these findings in a preprint that they have made available online.

“[On May 14], we put out a paper on the first 5,000 [patients] showing that [this therapy] was relatively safe. That’s the first step,” Dr. Casadevall explained.

“You want to show safety. And then the question of efficacy will be coming in the next few weeks. Right now, the data [is] being analyzed. We are hopeful,” he also told MNT.

“And,” he added, “especially since [the] Italians are reporting already that the use of convalescent plasma was associated with a drop in mortality [due to COVID-19]. We are hopeful that similar insights [will] come from the analysis of the data in the United States.”

In Europe, the European Blood Alliance — a non-profit association — report that 20 countries have initiated the use of convalescent plasma in the treatment of COVID-19 or are considering it for the near future. These include Italy, Spain, and the United Kingdom, some of the European countries most aggressively hit by SARS-CoV-2.

Demonstrating this procedure’s safety is essential because of the risks inherent to the transfusion of blood or blood components.

There is also the issue that adding more liquid volume into a person’s vascular system could lead to a risky overload, Dr. Casadevall explained.

“The concerns when you give plasma [include the fact that] rarely, you can get a transfusion reaction, [and] rarely, you could have a volume overload. What do I mean by that? I mean that […] you’re putting volume into blood, and if it goes in too rapidly, it could [lead to an] overload [of the] cardiac system,” he said.

“So when we looked at the experience of the first 5,000 [patients], we were very reassured that we did not see any major problems.”

Worries and hopes going forward
While different centers in the U.S. are already using convalescent plasma in the treatment of COVID-19, Dr. Casadevall expressed a worry that the therapy is not as effective as it might be because most patients receive it too late in the course of the disease.

Aside from its use in clinical trials, the Food And Drug Administration (FDA) have approved the administration of this form of therapy only in emergency situations to patients in a severe stage of the disease, which may not be soon enough.

“Often, physicians are using the plasma on patients that are very ill, and we don’t really know whether that’s going to be as effective as if you gave it early in the course of the disease,” Dr. Casadevall pointed out.

“Here in the United States, patients have been treated when they’re intubated, but we think that is relatively late. Many physicians are trying to move it earlier, that is, when people begin to decompensate,” he added.

But even where there is a will, getting this treatment to the patients who need it sooner rather than later is not always straightforward. “Some of the problem […] is that it takes time,” Dr. Casadevall explained.

“Because let’s say the doctor orders plasma and people are getting worse. It sometimes takes a while for the plasma to arrive. Some hospitals have it on site, others have to get it from blood banking centers.”

Despite these obstacles, the use of convalescent plasma therapy is so attractive to healthcare practitioners because they can access it and use it now.

Unlike with vaccines, whose development takes time, or experimental medication, which needs to go through several different stages of testing before it can obtain formal approval, this approach allows doctors to use what is already there — the blood of those who have recovered from the illness — to treat hospitalized patients.

“People often get confused [about the difference between convalescent plasma therapy and some vaccines] because they both involve antibodies,” Dr. Casadevall told MNT.

But while vaccines also operate on the premise of stimulating a person’s immune system to block or kill the virus, they do not use “ready made” antibodies, and testing them for safety and efficacy could take a year or more.

“When you get plasma, someone else is giving you the antibodies, and you get them immediately,” Dr. Casadevall explains.

Going forward, he thinks that doctors could use this therapy alongside other options as they gradually become available.

“[C]onvalescent plasma provides something that can be used today with standard knowledge and standard procedures […] But we do hope that better options will be available in the future,” he reiterated.