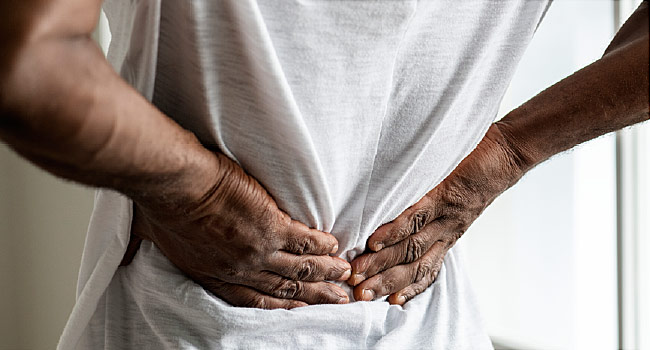 A new nonopioid pain reliever could be welcome news for people who have difficult-to-treat back pain.

Tanezumab is what’s called a monoclonal antibody. And it might offer extended relief from chronic lower back pain, a large, new study finds. However, a serious side effect remains a concern.

Tanezumab works differently from other treatments, as it blocks nerve growth factor, a protein that causes pain, researchers say.

“It appears that we are on the cusp of developing new drugs, which treat chronic pain by turning down the sensitivity of the nervous system, which is a whole new way of approaching the problem of chronic pain,” said lead researcher Dr. John Markman. He’s a professor of neurosurgery and neurology at the University of Rochester School of Medicine in New York.

“This is very important because we haven’t really had drugs with a new way of affecting chronic pain developed in maybe 100 years,” Markman said.

This phase 3 trial was funded by drugmakers Pfizer and Eli Lilly and Co. Twelve-hundred patients were randomly assigned to one of two doses of tanezumab or placebo. Another 600 patients received the opioid tramadol.

Currently, opioid painkillers or nonsteroidal anti-inflammatory drugs (NSAIDs) such as aspirin and ibuprofen are the only medications for chronic lower back pain. But opioids can be addictive, and NSAIDs can cause serious gastrointestinal bleeding.

If these drugs don’t work, the alternative is spinal fusion surgery, and that’s not always effective, Markman said.

Tanezumab is given by injection about every two months. It has none of the side effects of opioids or NSAIDs.

It does, however, have one very serious side effect that affects up to more than 2% of patients. The drug has been linked to joint deterioration that may require joint replacement.

This concern is the major focus of the U.S. Food and Drug Administration’s current review of the drug as a treatment for chronic pain from severe osteoarthritis, Markman said.