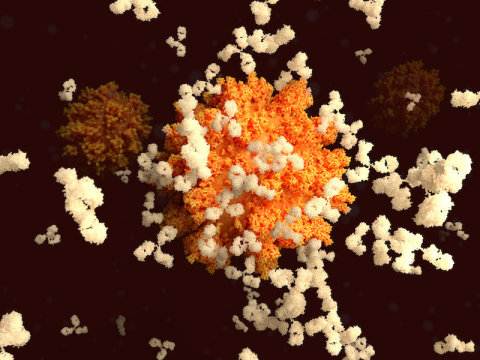 People who have had evidence of a prior infection with SARS-CoV-2, the virus that causes COVID-19, appear to be well protected against being reinfected with the virus, at least for a few months, according to a newly published study from the National Cancer Institute (NCI). This finding may explain why reinfection appears to be relatively rare, and it could have important public health implications, including decisions about returning to physical workplaces, school attendance, the prioritization of vaccine distribution, and other activities.

For the study, researchers at NCI, part of the National Institutes of Health, collaborated with two health care data analytics companies (HealthVerity and Aetion, Inc.) and five commercial laboratories. The findings were published on Feb. 24 in JAMA Internal Medicine.

“While cancer research and cancer care remain?the?primary?focus of NCI’s work, we were eager to lend our expertise in serological sciences to help address the global COVID-19 pandemic, at the request of Congress,” said NCI Director Norman E. “Ned” Sharpless, M.D., who was one of the coauthors on the study. “We hope that these results, in combination with those of other studies, will inform future public health efforts and help in setting policy.”

“The data from this study suggest that people who have a positive result from a commercial antibody test appear to have substantial immunity to SARS-CoV-2, which means they may be at lower risk for future infection,” said Lynne Penberthy, M.D., M.P.H., associate director of NCI’s Surveillance Research Program, who led the study. “Additional research is needed to understand how long this protection lasts, who may have limited protection, and how patient characteristics, such as comorbid conditions, may impact protection. We are nevertheless encouraged by this early finding.”

Antibody tests — also known as serology tests — detect serum antibodies, which are immune system proteins made in response to a specific foreign substance or infectious agent, such as SARS-CoV-2.

This study was launched in an effort to better understand whether, and to what degree, detectable antibodies against SARS-CoV-2 protect people from reinfection with the virus. Working with HealthVerity and Aetion, NCI aggregated and analyzed patient information collected from multiple sources, including five commercial labs (including Quest Diagnostics and Labcorp), electronic medical records, and private insurers. This was done in a way that protects the privacy of an individual’s health information and is compliant with relevant patient privacy laws.

About 11% of the seropositive individuals and 9.5% of the seronegative individuals later received a nucleic acid amplification test (NAAT) — sometimes referred to as a PCR test — for SARS-CoV-2. The research team looked at what fraction of individuals in each group subsequently had a positive NAAT result, which may indicate a new infection. The study team reviewed NAAT results at several intervals: 0-30 days, 31-60 days, 61-90 days, and >90 days because some people who have recovered from a SARS-CoV-2 infection can still shed viral material (RNA) for up to three months (although they likely do not remain infectious during that entire period).

The team found that, during each interval, between 3% and 4% of the seronegative individuals had a positive NAAT test. But among those who had originally been seropositive, the NAAT test positivity rate declined over time. When the researchers looked at test results 90 or more days after the initial antibody test (when any coronavirus detected by NAAT is likely to reflect a new infection rather than continued virus shedding from the original infection), only about 0.3% of those who had been seropositive had a positive NAAT result — about one-tenth the rate in those who had been seronegative.

Although these results support the idea that having antibodies against SARS-CoV-2 is associated with protection from future infection, the authors note important limitations to this study. In particular, the findings come from a scientific interpretation of real-world data, which are subject to biases that may be better controlled for in a clinical trial. For example, it is not known why people who had tested antibody positive went on to have a PCR test. In addition, the duration of protection is unknown; studies with longer follow-up time are needed to determine if protection wanes over time.

To continue to comprehensively address this important research question, NCI is supporting clinical studies that monitor infection rates in large populations of people whose antibody status is known. These are known as “seroprotection” studies. NCI is also sponsoring ongoing studies using real-world data to assess the longer-term effect of antibody positivity on subsequent infection rates.

This research is part of a $306 million effort that NCI has taken on at the request of Congress to develop, validate, improve, and implement serological testing and associated technologies applicable to COVID-19. Through this appropriation, NCI is working with the Department of Health and Human Services; the National Institute of Allergy and Infectious Diseases, another part of NIH; and other government agencies to apply its expertise and advanced research capabilities to respond to this pandemic, including efforts to rigorously characterize the performance of serology assays.