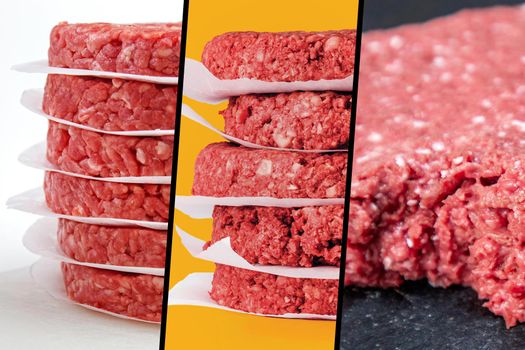 The explosion in the plant-based food market has many advocates hoping the plethora of new products will be part of a food revolution that aims to improve our health and save our planet.
Unless you’ve been living under a rock somewhere — or just quarantined for the pandemic — you’ve probably attempted to switch to a plant-based diet yourself or know someone who has.

Vegetarianism and veganism are wildly popular — one survey estimated the number of vegans increased 300% from 2004 to 2019 — and the diets and lifestyles are so much easier now with new plant-based products springing up all over the market.

In 2020, plant-based food sales were up 27%, with sales over $7 billion, according to the Plant Based Foods Association.

Impossible Foods, a company that produces plant-based meat alternatives, has thrived during the COVID-19 pandemic.

At the start of the crisis in 2020, the Impossible Burger was available in around 150 retail stores, according to Dennis Woodside, president of Impossible Foods.

Today, the Impossible Burger is sold in more than 22,000 restaurants and grocery stores, including major grocery chains like Kroger, Walmart, and Trader Joe’s, Woodside says.

Along with the health benefits that come with switching from animal meat to plant-based meat, people are also becoming more aware of the environmental benefits, he says.

“Animal agriculture is a leading contributor of greenhouse gas emissions globally,” Woodside says. “Our mission is to reduce the impact of climate change by skipping animals entirely and making the same meat, fish, and dairy products people love — from plants.”

Animal-based foods are responsible for 57% of the total global greenhouse gas emissions from agriculture, compared to just 29% for plant-based crops, according to a new report in Scientific American.

One way to reduce this impact is by creating plant-based meats that outshine animal meat in terms of taste, texture, and appearance, says Woodside.

His company has a goal to replace animal agriculture by 2035.

All Hands on Deck
The Eat-Lancet Commission on Food, Planet, Health brought together 37 scientists from 16 countries to study the best global diet to sustain our environment and feed close to 10 billion people by the year 2050.

Over 2 billion people around the world are overweight or obese, according to the commission. But at the same time, more than 820 million people are going hungry every day.

“A diet rich in plant-based foods and with fewer animal-source foods confers both improved health and environmental benefits.”

Food production plays a huge role in the destruction of the planet, the report states.

One way to fight this is to use more of our agricultural land to grow nutritious, plant-based foods instead of animal feed and livestock.

“The raising of animals is, first of all, very inefficient, so we take up a lot of land,” says John A. McDougall, MD, author of The Starch Solution and co-founder of the McDougall Program, a diet and lifestyle guide. “You can get 20 times as many calories from potatoes as you can from beef on the same acre of land.”

Knowing that your diet choices help protect our environment is one of the most exciting parts of going plant-based, says Sharon Palmer, an author and registered dietitian who specializes in plant-based nutrition and sustainability.

You can feel good about your place on the planet,” she says. “That your diet creates the lowest environmental footprint (carbon, water, pollution, land use) compared to other diet patterns, and doesn’t contribute to the suffering of animals.”

The fact that plant-based eating helps sustain the planet is not spoken out about enough, McDougall says.

“People who are intensively interested in climate change pretty much ignore the practical implications of the fact that changing the western diet to a vegan diet could be so beneficial,” he says.

McDougall says he approaches the climate crisis with the same attitude he has when helping patients heal their bodies through following a plant-based diet.

“My new patient is planet Earth,” he says. “Once we get the public, the world, switched to a plant-based diet that’s not so abusive to the planet, the planet will heal.”

“The time has come for all hands on deck.”

The inclusion of the Farm Bureau in the effort will be watched closely by climate activists, as the organization for years has fought even the idea that humans are responsible for change in climate, according to Inside Climate News.

A 2020 Gallup poll also found that 31% of non-white Americans ate less meat, compared to 19% of white Americans, the previous year.

Next Stop Vegan is a plant-based restaurant that serves food with Latin flavors, including traditional Hispanic dishes, with locations in the Bronx and Washington Heights in New York City.

Blenlly Mena, founder and CEO, says she was inspired to open the restaurant to change the stigma surrounding vegan food, especially in minority communities.

“There are several misconceptions in our communities that include healthy food being inaccessible, boring, or bland,” she says.

“Black beans and brown rice can also make great burger patties, yes jackfruit can be delicious and a great addition to that next BBQ, and our typical Hispanic dishes, with only a few modifications, can be amazingly delicious,” she says.

Many customers say that transitioning to veganism completely transformed their lives, Mena says.

“We also welcome those that have their doubts and questions, because it’s an opportunity for us to educate them, and yes, why not blow their minds,” she says.

Making the Switch
Many people mistakenly think that going plant-based means you have to be an expert in the kitchen or spend money on pricey designer plant meats, says Palmer, the author and dietitian.

Another major reason people struggle, or quit, after trying a plant-based diet is not being prepared, says Palmer.

“You can’t just all of the sudden eat plant-based without some preparation, such as stocking your pantry and fridge regularly, knowing what your go-to foods will be, understanding what dishes and meals you will rely on, and where you can find products in your community,” she says.

McDougall promotes a diet of mostly starches, like potatoes, rice, and beans, along with vegetables, fruits, healthy fats in moderation, and no animal products or added oils.

Human beings are “starchivores,” he says.

“Most people who ever walked this earth consumed a diet based on starches. Mayans and Aztecs in Central America were known as ‘people of the corn.’ Incas in South America ate potatoes.”

Asian civilization was shaped around cultivating the crop we know today as rice, according to a study in Nature.

He says he always recommends a vegan diet to patients, especially those who have serious health conditions like obesity, diabetes, and hypertension.

Many patients make the switch by following a simple process, Barnard says.

Step one, patients are told to make a list of their favorite foods that don’t have animal products.

“The patient comes back in a week and they’ve written down breakfast, like oatmeal with cinnamon and raisins,” Barnard says. “Lunch, chili instead of meat chili. Dinner, spaghetti with marinara sauce.”

The next step is for patients to eat from their list for 3 weeks straight.

“After 3 weeks, if they’ve actually done it, two things have happened,” Barnard says. “Physically, they’re changing, they’re losing weight, their blood sugar is down, their cholesterol is down, their energy is better, their digestion is better. But apart from the physical changes, their mindset is dramatically different,” he says.

If you are new to plant-based eating, approach it as you would learning a new language, says Julieanna Hever, an author and registered dietitian who specializes in plant-based nutrition.

“You learn a few words, you get a new ingredient that you’ve never tried, maybe some jackfruit,” she says.

“You’re starting to build this whole new repertoire of words and paragraphs,” she says. “But there’s a transition period. You have to get familiar and comfortable, and with time, it gets easier and easier. And then you become fluent.”

Plant-Based Made Easy
More plant-based options make life simpler for vegetarians and vegans, especially when grabbing a quick bite on the run.

Toni Okamoto is the founder of Plant-Based on a Budget, a website and meal plan that aims to show that plant-based eating can be simple and cost-friendly.

The plant-based market has come a long way, she says.

“My friends and I would take turns driving 2 hours to buy 5-pound bags of Daiya (the only way you could purchase it) to split,” says Okamoto, referring to a Canadian company that specializes in dairy alternative foods like cheese. “Now, there are so many varieties of vegan cheese that are widely accessible.”

“When I became vegan in 2007, the thought of walking into a fast-food restaurant and getting a meat-like burger made without animals was a fantasy,” she says. “Today, that fantasy has come true!”

“I buy a lot of plant-based products like hummus and vegetables, but I also appreciate and enjoy accessible options, like Beyond Meat burgers from fast-food restaurants like Carl’s Jr., as well as MorningStar Farms ‘chicken’ nuggets from Walmart,” Okamato says.

But you shouldn’t overdo it on products that are vegan, but not necessarily healthy. For example, while the new McDonald’s McPlant burger has a slightly better nutritional profile than the restaurant chain’s Quarter Pounder with Cheese, it’s still not health food.

“I’d be thrilled for people to just enjoy more bean-and-rice burritos, lentil soup, and other plant-based foods,” Okamoto says. “But a lot of people seem to want that meat experience. This new generation of plant-based meat does a great job of giving it to them without the need to use animals.”

“Because ‘anything you can eat, I can eat vegan,’ like vegan cookies and burgers, there are all of these different options,” she says. “People are eating that and thinking they are healthy. There is a health halo over it vs. treating them like treat foods, as they should be.”

One worrisome part of the rise in highly processed plant-based products is that negative health effects can cloud the benefits of plant-based eating, Hever says. For example, while “beef” from Impossible Burger and its competitor Beyond Meat have no cholesterol, they are similar to real beef in calories, fat, and saturated fat. And both have almost 5 times as much sodium.

“I’m seeing for the first time in my practice, over the last 3, 4, 5 years, people who have been vegan coming to me with the same health issues as their omnivore counterparts,” she says.

“I’m concerned about that in terms of what’s going to happen in the scientific literature when we start lumping all the vegans together and not discerning what their actual diet consists of,” Hever says. “You can eat healthier or can eat less healthy, but it just kind of gets lumped in, and it can change the data.”

Compassion: The Missing Ingredient
The Minimalist Vegan is a digital lifestyle brand that explores the concept of living with “less stuff and more compassion.” The blog features articles like “15 Practical Steps to a Zero-Waste Kitchen” and “Is Fishing Ethical? Assessing the Cruelty of the Fishing Industry.”

Michael Ofei co-founded the brand with his wife Maša in 2015. The couple, based in Australia, transitioned to veganism the year before.

“After watching the film, we decided to become vegan on the spot and haven’t looked back since.”

As plant-based eating continues to get more popular, movements surrounding topics like animal rights and environmental sustainability can gain steam and create systemic change, he says.

Compassion for all, both humans and non-humans, is Ofei’s ultimate hope for the future of veganism and plant-based eating.

“As a society, we’re fighting for equality across all marginalized groups, including age, race, religion, disability, sexual orientation, class, indigenous heritage, and gender,” he says.

“I hope over time, we can expand our views of equality to also include animals.”