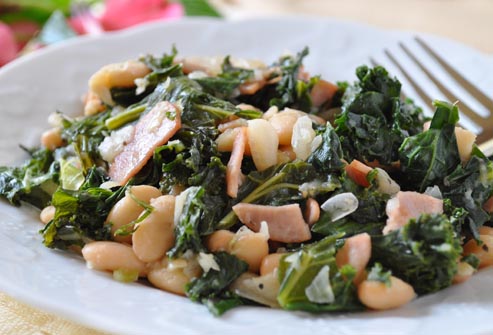 Sautéed Kale and White Beans
For decades, Italian country cooks have simmered greens and buttery white beans together. A quick version from cookbook author Holly Clegg starts with Canadian bacon browned in a pan. Next, sauté an onion in olive oil. Add chopped kale, a can of white beans, chicken broth, and stir until the greens are tender. Canadian bacon adds meaty flavor with less fat than regular bacon.

Beets, Greens, and Black Licorice
Want to serve leafy greens like a top chef? Try a salad of sliced beets and beet greens, the creation of Top Chef All-Stars winner Richard Blais. He tames the bite of the greens with shavings of black licorice. It adds a kick and a false sense of sweetness, like using cinnamon or vanilla. At his newest restaurant, The Spence, he adds a little horseradish as a final touch.

Salmon Steamed in Collards
Collards have big, wide leaves with a cabbage-like flavor. Chef Blais blanches them briefly in boiling water, then plunges them into ice water. Once soft, fold the leaf over uncooked salmon like a wrap. Steam the fish in the collard leaf until the salmon is tender.

Southern-style Greens
The true Southern way to cook collards — or the more peppery mustard greens shown here — is with chunks of ham or Andouille sausage. Recipe developer Clegg, who calls Louisiana home, creates a similar flavor with turkey sausage or Canadian bacon. This cuts the fat and sodium in this favorite side dish. After browning the meat, add olive oil, onion, broth, and leafy greens until wilted.