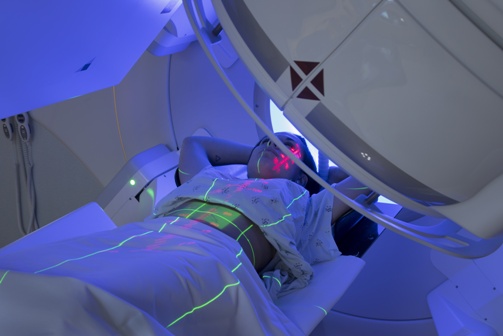 “We have a very powerful treatment which contributes to the cure of cancer in around a third of patients treated,” says Professor David Sebag-Montefiore from the University of Leeds of radiotherapy, a cornerstone of cancer treatment in the UK.

But there’s always room for improvement. “Some of the radiotherapy we give today isn’t doing a good enough job.”

We want more people to reap the benefits of this tried and tested treatment, so we’re investing £56 million to launch the Cancer Research UK Radiation Research Network (CRUK RadNet). This will support radiotherapy research in seven specialist institutes across the UK and aims to propel radiotherapy into the future.

It’s money to develop new tech, harness the power of existing ones, apply approaches like artificial intelligence (AI) and to help scientists really understand what’s going on when cancer cells are hit by radiotherapy beams, so we can use drugs to boost their cancer-killing effects.

“Because radiotherapy is an effective treatment across such a broad range of cancers it’s clearly a job that can’t be achieved in one centre alone,” says Sebag-Montefiore. This new initiative hopes to make use of the different expertise from each research station involved, bringing in knowledge from scientists who have never worked in radiotherapy before. “This network will allow us to focus along the breath of cancer research and actually make a big impact.”

Although radiotherapy has become extremely advanced in the last couple of decades and comes in many high-tech forms, there are still plenty of questions around how it’s effects can be maximised to benefit more people and how to reduce side effects of the treatment.

Here are just three of a number of research areas CRUK RadNet hopes to get answers for.

How does radiotherapy affect the tumour microenvironment?

But cancer cells aren’t just quietly hanging out by themselves. They’re sitting in a busy environment of blood cells, immune cells and healthy tissues, all of whom are likely to be interacting.

The full extent of the influence these cells have on each other is still unclear, but clues from the clinic suggest that the immune system plays an important role in mopping up cancer cells after radiotherapy, even after they’ve spread to other parts of the body.

“Clinically we are now starting to see situations in people who have incurable cancer that has spread, where irradiating the primary tumour improves their survival,” says Sebag-Montefiore. It’s a positive benefit that scientists are still working to understand.

One theory is that radiation causes cancer cells to break down and release their contents, which creates lots of interesting molecules for the immune system to detect and home in on. The energised immune cells then move around the body looking for cancer cells displaying these same molecules. And when they find them, they kill them, which may explain why tumours that are distant from where the cancer first started shrink.

Figuring out what’s going on in and around a tumour when it’s being irradiated could point to ways to enhance treatment and may even help radiotherapy work for those who currently don’t respond to it. For example, immunotherapies could give immune cells the boost they need to turn against tumours. Or, giving patients drugs that stop cancer cells repairing their DNA alongside radiotherapy might give the cancer an extra blow.

Sebag-Montefiore says there is clearly a substantial piece of work needed to understand the environment that the radiotherapy beams operate in and are also creating. Learning more about this will help us “know how to best to harness the microenvironment and have maximum impact”.

“This is a significant part of the work that will be done in CRUK RadNet.”

How could AI improve radiotherapy?

Every day we hear of new ways that AI is improving everything from how we shop to healthcare. Now Sebag-Montefiore and his team in Leeds, alongside researchers across the CRUK RadNet network, are exploring how it can be used to help cancer treatment.

“In Leeds, we think we can harness AI to actually improve how radiotherapy is given to patients.”

Computer programmes may help them deliver a highly targeted radiotherapy called SABR more accurately, sparing healthy cells. “Both the tumour and the organ we target during treatment move so we apply a safety margin around the tumour to make sure we hit the whole tumour. At the moment this margin is pretty much the same for every patient.”

But the money from CRUK RadNet will allow them to develop algorithms that could work out the exact area the radiotherapy beam will need to cover for each patient. The team hope to use AI to analyse MRI scans from a range of cancers that are in areas of the body that move a lot, like the liver.

“We could analyse those scans with AI to build up a personalised picture of the actual movement,” which means more precise treatment and fewer side effects.

Why do cancer cells become resistant to radiotherapy?

Unfortunately, radiotherapy doesn’t work on everyone.

“We need to understand why radiotherapy isn’t as effective as it could be in some patients,” says Sebag-Montefiore.

“Within all cancers we can identify some groups of patients where radiotherapy resistance is a major barrier to the cure of cancer.”

This may be someone whose cancer initially responds well to treatment but then it stops working. Or, in a few cases, radiotherapy might have no affect at all.

CRUK RadNet members are investigating resistance from a number of angles, looking at ways to overcome the fact that radiotherapy can’t destroy certain cancers. They’re particularly focusing on the cancer types where survival is still depressingly low, like pancreatic cancer and brain tumours.

For instance, a team in Manchester are delving into how radiotherapy changes the biology of cancer cells and how this may contribute to them standing firm against its powerful beams.

Sebag-Montefiore is keen to get going. “The last 10 years have seen significant progress in radiotherapy research, but we can do better.”

“CRUK RadNet is a fantastic investment because it gives us a great chance in improving radiotherapy cure rates and reduce side effects further to ensure patients are getting the best possible treatment.”