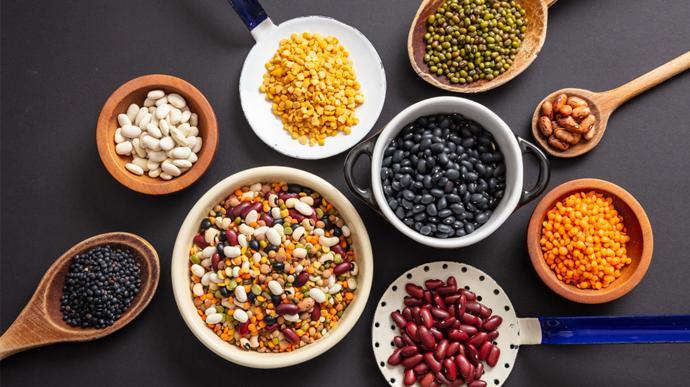 With so much focus on plant protein as a sustainable swap for meat, foods like quinoa are hotter than ever. But there’s another protein source, probably already in your pantry, that has even more protein, boasts a low carbon footprint, and costs pennies per serving. It’s a group of foods called “pulses.”

Pulses include four crops that you’re probably well familiar with: dry beans (like black, pinto, and kidney), dry peas (like split and black-eyed), chickpeas (also called garbanzo beans), and lentils (like green, brown, and red). They’re harvested dry and sold either dry or canned. The latest Dietary Guidelines for Americans defined pulses for the first time, and they’re unique because they “count” as either a vegetable or a protein source on your plate.

Nutritionally, pulses are hard to beat as a plant protein. A one-half cup serving has more potassium than a small banana, four times more fiber than brown rice, more iron than a 3-ounce portion of flank steak, and twice as much protein as an equal amount of quinoa. All for about 10 cents per serving (versus nearly $1.50 per serving for beef).

There’s also increased buzz around pulses because they’re a sustainable crop. They need less water to grow than many other crops. They also take nitrogen from the air and fix it into the soil, naturally restoring nutrients to the soil and lowering the need for nitrogen fertilizers. They’re also less likely to be wasted since they last for years on shelves, dried or canned. (Here’s a quick primer on cooking dry peas, beans, and lentils.)

Unfortunately, most Americans aren’t eating pulses very often. The Dietary Guidelines recommends at least 1 1/2 cups per week in a typical diet, and most adults get less than a cup. Here are some easy ways to eat more of them:

Stretch ground beef with mashed black beans or ground turkey with chickpeas when making taco filling.
Combine cooked lentils with ground beef when making meatballs and meat sauces (tip: if you’ve got lentil-wary eaters, red lentils tend to dissolve when cooked while green and brown hold their shape).
Roast canned chickpeas (season them with taco or curry spices) to sprinkle onto salads, serve in rice and veggie bowls, or eat as a crunchy snack.
Blend 1/2 cup cooked cannellini beans into a smoothie for a thick, protein boost
Add beans to homemade soups and chili.
Puree cooked chickpeas into quick hummus (here’s my easy recipe) and serve with pita bread and raw veggies.
Beat the liquid from unsalted canned chickpeas (called aquafaba) with a hand mixer for several minutes, adding a few tablespoons of sugar as you mix, to make a foamy vegan whipped topping.